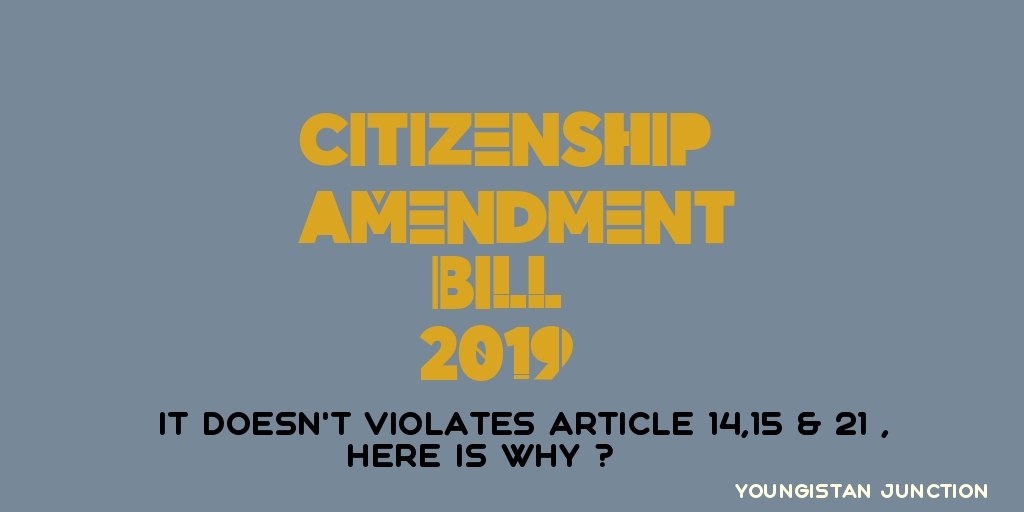 Does CAB – Citizenship Amendment Bill Violates Article 14 ? : CAB i.e citizen ship amendment bill of 2019 is in news for all the positive and negative reason now days , the bill get passed in Loksabha om 9th Dec. 2019 with huge majority and now being presented in Rajyasabha on 11th Dec. 2019.

From the starting itself , many are claiming that the bill is anti constitutional and it violates the Article 14 Of constitution, does it really violates ? let’s see below

First let us see what is Article 14 Of India ?

Article 14 States Equality before law : The State shall not deny to any person equality before the law or the equal protection of the laws within the territory of India Prohibition of discrimination on grounds of religion, race, caste, sex or place of birth.

Now coming to the topic , the new Citizenship Amendment Bill 2019 if for the minorities from our three neighboring nations i.e the Bangladesh, Pakistan and Aafganistan , these countries have already declared themselves as islamic nation and the non-muslim religion are the minorities there , and the Indian Citizenship Amendment Bill grants citizen ship to those who belongs to minorities.

Does Is Violates Article 14 ?

Above reservations and laws shows that there are special provision for the minorities on the basis of religion too , then , how can this bill be be unconstitutional ? Checkout Our More post from INDIAN POLITY.

What do you think of it ?? what are your views on it , please let us know in comment box.