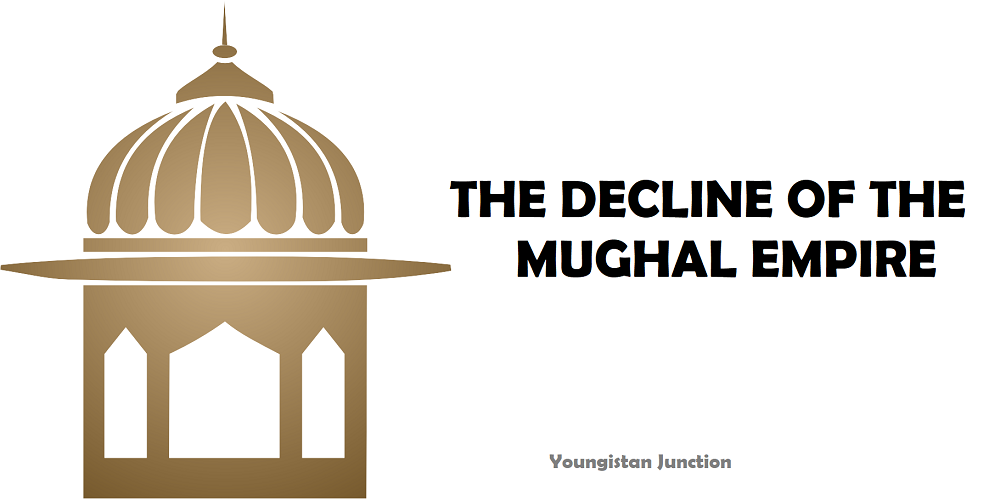 The Decline Of Mughal Empire

The Decline Of Mughal Empire is topic from the history of modern India by bipin Chandra, this topic is first ever topic that comes when we start reading about the history of Modern India. Here we will try to summarise the whole chapter 1 , The Decline of mughal empire. We will provide you summary and short but full detailed version of the chapter.

Mughal empire the word that we are hearing since we are class 4-5 , the great mughal empire ruled India for more than 200 Years but like everything, it also faces decline and by the end of 1803, the mughal emperor was pensioner of the Britishers. The decline was not all of sudden it takes years and years and lots for social, economical & political factors are responsible for it.

The Initialisation Of Decline :

The bad phase of mughal was stated during the time of Auranzeb due to his strong and rude policies but the real decline started after the death of Auranzeb in 1707 , three of his son’s fought with each other for the crown and at the end 65 Year old Bahadur Shah crown himself as the king, he was more dignified and intelligent as compared to his father Auranzeb and he feels that he need to reverse some of the steps taken by his Auranzeb. He became more tolerant towards Hindus and there were no destruction of temples in his reign. He tries to replaces jai singh as the chief of Amber with his brother Vijai singh and cities of Amber and jodhpur as home base but he was unsuccessful.

Bahadur shah tries to improve the condition of Mughal empire both politically and economically by doing lots of changes , he took many of the rebels of that time together like rebellious sikh Guru Gobind Singh, Chatrasal the chief of bundela and many other but the condition get worse due to his reckless grants of jagirs and promotions during his reign 13 crores of rupees were exhausted. He may able to make the condition of Mughal empire by his polices but his death in 1712 put the empire into a blackhole of Civil war.

After the death of Bhadur Shah I of of his son Jahandar Shah crown himslef as king with the support of powerful nobel Zulfiquar Khan, Jahandar shah was a fool, idiot and uncivil king, he was wholly devoted to sex & pleasure and the administration was virtually in hand of noble and talented wazir Zulfiquar Khan. He again believes in secular policy and tries to established a healthy relation between the Rajaputs and Marathas. He abolished Jizyah (Wiki) a tax on non muslims, he given the title of Mirza Raja Swai & Maharaja to Jai singh and Ajit singh, they were also appointed as governor of malwa and gujrat.He make good relations with Maratha king sahu too, only with the Banda & the Sikhs he continued the old policy of suppression. The only bad policy he started is  ijarah (wiki) revenue farming.

The influence of Zulfiquar khan was increasing at that time and this increases jealousy among many other nobel of that time, they started poisoning the ear of Jahandar against the wazir Zulfiquar and the king started to intrigue against him and this was his biggest mistake. The crown of Jahandar shah was put down in 1713 by his nephew Farrukh Siyar at agra.

After killing his uncle Jahandar shah in 1713 farukh siyar crowned himself as king and owed his victory to Abdullah khan & Husai Ali Khan also known as Saiyid Brothers , Saiyid brothers wanted to control the whole empire but it was impossible as Farrukh siyar was there they fought many times but get defeated by the Farrukh Siyar but in 1719 saiyid Brothers killed Him and 18 Year old Muhammad Shah was made as king of India

The “King Makers ” Saiyid brother ruled from 173-1720 as the king Muhammad shah was puppet to them and they also tries to modify the drowning economy and political stability of the Mughal empire they again followed the principle of secular society and join hands of Hindu chiefs and Rajas, they won the trust of many Rajas & chief by granting them high posts and right to collect revenues, but the brother’s were not able to succeed due to the conspiracy against them by his fellow nobles, Powerful group of nobles headed by Nizam-ul-mulk and his father Muhammad Amin Khan started to conspire against them and they finally succeed, Husnain Ali khan was murdered by them in 1720 and Abdullah Khan was defeated in agra.